The publishing of my page on the Web gave some very interesting effects, but a few comments first.

The Soviet Union was featured by the negligence to the past to the extent of making it one of postulates of historical materialism. This is not to say that the past was simply denied, contrary to that, the selected pieces of history, which served best to the interests of the ruling class (reads the Communist Party) were polished and cherished. It was still another postulate, but it is not the point. The point is that while the cruiser Aurora, the symbol of the revolution of 1917 was kept as a ship-museum, the battleship Potemkin, the active participants in the dramatic events of 1905, was cut.

Aside from the ideological considerations, quite possibly it was not handy to keep the material evidences under the conditions of re-writing history.

In fact, many famous or simply interesting tanks, aircraft and ships were lost forever just because nobody cared. Blowing churches was the favorite outdoor sport in 30th, but it is another subject completely.

The war left a lot of damaged and lost engines of war scattered all over the vast spaces of the USSR. The most were cut and utilized as a scratch metal after the war. Some remained laying in swamps, forests and other hidden places. Some places of heavy battles remained as is, with dead soldiers and their weapons of both sides in combat forever.

Forever is a long word. While the State demonstrates no interest, the people do. One kind sees in such places the gold mine of collectors' samples of all kinds from insignia to tanks, the others - the cheapest way to retrieve weapons (they got caught from time to time by the police on the charge of illegal owning of weapons). These two kinds are called black diggers.

In the opposition to the black diggers there are different groups, which want to restore the History and bring their findings to the public attention. 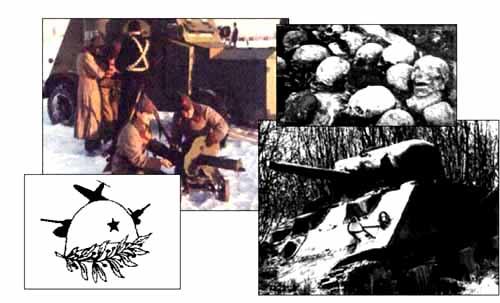 Usually under financed, if financed at all, these guys at their risk and expense retrieve and restore the tanks, bury the remains of the soldiers. The hardware is normally kept in the existing museums under the ownership of the group.

The financing does not mean any salary or profit. There are costs charged for trucking, cranage etc., which can not be avoided. That is, the project is carried out as soon as enough money is collected with any help welcomed and appreciated, otherwise it is suspended.

It is bad because not only with passage of time the specific items are getting more difficult to retrieve, but the covetous digging goes on as well grasping whatever possible.

If the activity of black diggers is understandable, the efforts of SAS (search-and-salvage) groups deserve the respect, to say the least.

I was always fascinated by the guys, which, despite all the obstacles (imagine swamps AND moskitoes!) and problems, do heavy, risky (ammo and mines are still there, too!) and ungrateful job of saving the items of the historical value for the future, and, when contacted by one of the oldest group in Moscow, Ekipazh (The Crew in Russian), eagerly responded.

During the meet we discussed a lot of things and agreed that I will do a coverage of the group activity at my Website as the subjects and objectives of both are very close.

For a start, I have attached the article to the section People because the moving force of all this is the attitude of the guys, but with the development a special section might be started.

The pilot articles will cover the plans for the 1998 and earlier achievements. As soon as the spring finally starts I plan to make a few close-up articles on the tanks and whatever else will grasp the attention.