Ekipazh recent exploits or what was happening in May of 1998.

The spring is a good time. After the careful preparation of group's workhorses, trucks GAZ-66 and ZIL-157, the long holidays in May were exactly the time to launch new expeditions. The season was opened with an expedition in area of small village Tarakanovo, 50 km from Moscow .

There were indications that there is a sank German tank in on one of rivers. Unfortunately, the rumors remained rumors, but the negative result is still a result. The saying, though, seems to be made by the guys who could not get a positive result. The further questioning made elders remember that a couple of tanks, indeed, sank back in 1941 but they were Soviet KV's, which were retrieved and repaired back in 1942. As a consolation, two more German tanks were rumored to be in the vicinity - a good reason to come back later!

The elders remembered that, in 1941, retreating German troops (the 6th Pz. Division) left so many tanks, trucks, guns and cars, that all roads were actually jammed and it took a few full months to collect the trophies.

The traces of the war are still very much present in this populated area not far from Moscow. The old shells and mines haunt the peasants. In the village itself the old store of Flack 38 shells as well as some ammo for heavy guns was found, which, very likely, were prepared for the bombardment of Moscow. 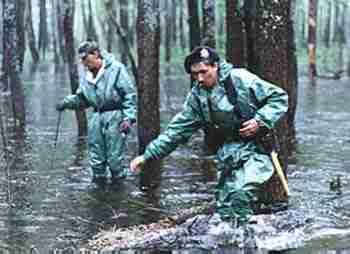 The next expedition in the area of Viazma was handicapped by the weather. The rains rendered the forests barely passable. Streams of water hide the ditches, trunks of trees…
Moving forward was like moving on the mine field - never knows what brings the next step but nothing can stop a determined soul!

Step by step, swamps and forest were revealing the traces of fierce battles of 1941. In these places the surrounded but not defeated troops of the Red Army were breaking the encircling them German troops, taking and returning serious losses.

The expedition lasted four days. It was barely enough to find and bury the remains of a few Soviet soldiers.

The third expedition was to the famous Gnezdilov heights near the city of Spas-Demensk. The heights, having a strategically favorable position, saw months long bloody battles in 1943. A few months lasted the fight for this small piece of the Russian soil. And again the rains made their black job raising the level of water in the local small river by 1.5 m. The flood could not hide wheels, hulls and turrets of T-34 tanks, silent witnesses of the battles in hot 1943.

It should be mentioned that due to the financial problems, all expeditions were to locate the objects of interest only.
The next was the traditional commemorative act, in which many search groups took part. Traditionally, all participants go to small city Panfilovo, 12 km to the south from Viazma, the place of heavy battles in 1941. More than 50 years many Soviet soldiers remained unburied. From year to year volunteers find and bury the defenders of the Motherland.

This time seven soldiers and officers of the Red Army rested at last. Five wrecks of GAZ-AA as well as three cars GAZ-M were found. The place looked like the last stop of divisional HQ. Here and there the elements of communication equipment were laying around. The pieces of communication equipment scattered around and resin post stamp led to think that the truck belonged to support units.
One of the cars had field modification. The rear part of the body was removed, evidently for the better observation of the attacking from behind German aircraft, which dominated the sky. In general, many wrecks were found in this area, ranging from scattered details of cars to blown guns, which could not be hauled any longer.

Unfortunately, the bad weather prevented further expeditions. The information of the presence in the forest PzIII, a couple of T-26's and T-28 (!) remained unchecked.

More news as it happens.