The history of the Soviet heavy tank KV

"KV proved in combat that a single KV costs 14 German tanks." From the memoirs of Gen.Morgunov

There is no need to repeat the stories of KV's withstanding hundreds of hits, or of a single KV disrupting the rear lines of two or three advancing to Leningrad German divisions, as they are well known and numerously repeated here and there.

This tank has gone the whole way from almost ultimate weapon in 1941-42 and a sitting duck in 1943 and later. The story of its creating reflects the different technical trends of the time as well as underwater currents of contemporary Soviet realities.

The history of the Soviet heavy tank KV, named after one of Stalin's favorites of the time, Kliment Voroshilov, began in 1937 when GABTU (Main Armor Department) formulated the technical task for the tank with anti-shell armoring. Two design bureaus, both in Leningrad (Plant "Bolshevik" and Kirov Plant), were assigned to this task.

At this time, it was evident that the Red Army needed modern replacement of heavy T-35, land battleship with the archaic multi-turret design.
However, the original technical task was again issued for the multi-turret tank with the weight 55 ton.
From the beginning, the technical problems with heavy multi-turret design precluded the reliable armoring and very soon it became clear that the possibilities of this design were limited.

The scale model of Kotin's design, SMK (Sergei M.Kirov, what else?) to be presented to Stalin on December 9, 1938, could be easily switched between versions with three turrets, two turrets and even the version with one turret. In the discussion Stalin backed up the designers and ordered to prepare till August 1939 a tank with better armoring and two turrets.

Despite that order, actually one more tank was designed: with one turret, 76.2 mm gun and still better armoring as Kotin and his engineers proved that one turreted could take more armor with the same, or better, speed and maneuverability. No additional armor could be added to the SMK, as it had already reached the weight limit of 55 ton even with only 60-mm armor. Further enhancement of the defense would result in the overweight above 55 tons, thus causing the troubles with the railways, were it adopted for the production. Hence this trick with the model.

The group of designers chiefed by N.L. Dukhov was busy with the works on the KV project. In contrast to SMK KV was by 8 ton easier, with 5-tanker crew instead of 7 on the SMK and with better armor. The same gun L-11 was installed on both KV and early T-34. Although 85-mm gun was already tested on T-28, the offer of Grabin to arm KV with it was declined on the ground that there were no reasonable targets for it on the battlefield and that 76.2-mm L-11 was more than enough. The tank took 111 shots aboard and was powered by 600 HP diesel V-2K.

Finally, Stalin authorized the building of all three prototypes: KV, SMK and T-100. According to the legend, Stalin specifically demanded to stop making TzUM (big shop in Moscow built in end of XIX century in the gothic style, i.e. with many small towers on the top of it) from tanks, GABTU order or not.
The prototypes were finished and tested in September 1939 in Kubinka.
The KV gave much better performance and despite the problems with the unreliable transmission was adopted for the Red Army on December 19, 1939.

All prototypes were sent to the Finnish front to be tested in the real war.
SMK blow up on the mine and was salvaged only after the end of the war. KV gave a good account of itself, but, at the same time, the need for a tank with heavier gun became evident. Such tanks were needed for the breaking fortified lines. Thus, KV-2 was produced by the installation of a new turret with massive 152-mm howitzer on the same KV chassis. Although the tank had impressive outlook and good firepower, the transmission was overloaded as well as the whole tank. The old problem with the unreliable transmission, tankers headache and the cause of many non-combatant losses, was aggravated. Some time later, KV received the same F-34 gun as T-34 but under the name of ZIS-5. 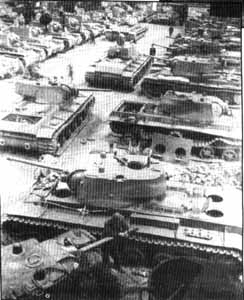 Still, combining the superb armor and reasonable firepower, KV was a step forward. No other country had the tank of this class at the time. At best, Germany could come out only with Pz.IV. Due to the inherent transmission problem, KV's broke often but the moving KV was a terror and nightmare of the German Army in 1941-42. The only effective counter measure was the venerable 8.8 cm gun until Tiger and later versions of Pz. IV rendered KV obsolete. Nevertheless, some KV's survived till the end of the war.

The heavy outdated tank, armed with the same gun as T-34 but without the dynamics of it, was not welcomed by field commanders, which preferred T-34, and finally the production was stopped in 1943.

The competion with new German armor and the lessons of Kursk stimulated the designing of the new modifications of KV, which finally resulted in IS family of tanks. KV took its due place in the history for its innovative design as well as for fighting during the most difficult period of the war.