With the bias to the Russian specifics (see Things to remember) following versions are known:

Remark: the experimental tanks, prototypes and other military things were and are referred to as "Item No." before the war or "Object No." from more or less the beginning of the war till our days.

KV-3 (Object No.222). In 1940 the rumors about new German AT guns, which were believed to bore holes in everything, resulted in the calls to enhance the armor on the KV.  Officially adopted in May 1941 KV-3 was to be the major modification of KV with the better armoring (90 mm, 51 ton), new 700 HP engine B-5, commander's cupola and F-34 gun. However, it was decided that, starting from August 1941, KV-3 was to be produced with F-32 gun.
Due to the outbreak of the war and the need in tanks, the final order was to retain KV-1 in production but with the gun F-34.
This version with F-34 gun is customarily referred to as KV-1 model 1941.

KV-1E (E for ekrans) The fear persisted and extra 35 mm armor plates were installed on KV-1/1940 as the industry could not thick enough armor plates.

KV-1 model 1942. This is a KV with the casted turret. The casting allowed to produce the armor of any thickness. This turret had 120 mm armor.
Overall the turret looked more rounded as compared to the welded version.

Object No.220. The same fear called for a still heavier tank. This tank was, indeed, designed and had 100 mm armoring and 85-mm gun F-30.
The works on the object were suspended in the beginning of 1941 after the declaration of General Kulik, the Chief of the Artillery dept. (GAU) that the armor of German tanks could not be penetrated by shells of the Soviet 57-mm AT gun and 76.2-mm F-32 as they allegedly had 100 mm + armor. He insisted on the development and production of 107 mm ZIS-6 (AT) and ZIS-7 (tank) guns.
The final decision was to stop the production of 57 mm and 76.2 mm guns (just before the war!) and concentrate the efforts on 107-mm guns yet to be designed. Object No.220 was to be armed with 107-mm gun instead of 85-mm gun. A few built prototypes, of which one took part in the defense of Leningrad, had the weight of 60-65 tons, front armor 100 mm, 6-men crew, 850 HP engine and, tested on KV-2, 107 mm gun F-39. The tank had 7 rolling and 4 supporting wheels on each side, as compared to 6 and 3 wheels respectively on KV. 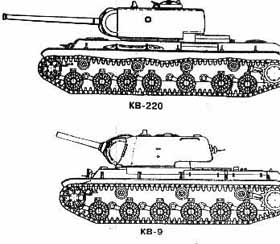 KV-12. Project to install the dispenser of the poisonous gas was sometimes referred to as KV-12. On the other hand, the designation KV-12 was used for 203 mm howitzer installed on the base of KV (self-propelled gun) as well.

KV-1S. S for speed. All possible steps were made to decrease the weight of the tank: new turret, wheels, tracks and modified hull. Transmission was enhanced. The most distinctive version of the KV. The production started in 1942 and was stopped in 1943. The last mass modification of the KV tanks. Albeit much faster than the KV, it retained 76.2-mm gun and could not withstand new German armor.

So called "universal tank". With the death of the KV in view and the general necessity to modernize both T-34 and KV, an effort was undertaken to make a tank, which could replace them both. Conceptually, it was an idea of a main battle tank. The tank with reduced number of wheels was still easier than KV-1S and could use the tracks of T-34. At the time this project and T-43 were completed, it was absolutely clear that 76.2 mm guns were already history due to the appearance of Tigers and Panthers. The tanks with 76.2-mm guns, whatever modified, were not the answer to this threat. The work on T-43 and KV-13 was stopped with the reallocation of efforts to the installation of heavier guns.
Still, many units and aggregates from KV-13 were used in IS tanks.

KV-85. In 1943 the attempt to install 85-mm gun in KV-1S turret failed. The installation of the passable turret demanded structural modifications of the hull. 130 tanks were produced before the production was finally switched to IS's.