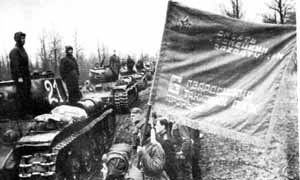 The title Guard is the honor bestowed to the ships or units forthe skill and heroism demonstrated in battles. The Guard was born on September 18, 1941 when divisions ## 100, 127, 153were renamed into the First, the Second and the Third Guard Divisions respectively. The First Guard tank brigade appeared on November 11, 1941 on the base of 4th tank brigade. On November 26, 1941 first Guard cavalry units were formed, on December 6,1941 - the First Air Force unit.

In many cases the unit simultaneously received a name usually related to place of the heaviest battles for which it was honored, like Kantemirovskaja Guard Division, Tamanskaja and many others. It happened often but not necessarily. Giving a name to the unit was the lowest honor. After receiving a name the unit could be (or could be not) honored The Guard later. As a rule, the individual units were honored The Guards when the top level unit was, i.e. if a bridade was transformed into the Guard brigade, the units it comprised were re-numerated and renamed The Guards.

The original unit's number remained free and later could be assigned to a newly formed unit (Armies of the second formation, to give an example).

The units with Katjushas (reactive artillery) were also attached to the Guards. A newly formed division, brigade or corps was also named Guard if one of the units included in it was awarded the Guards before.

Being the elite troops, the Guards were used in the most important operations.

During the war, The Guard titel was awarded to 6 tank Armies, 12 tank corps, 66 tank divisions and many other units.