T-34's of early versions gave their top performance during the Kursk/Citadel battle in 1943. The superiority on the battle ground was reached not due to the technical perfection, as in this respect German tanks were en masse comparable and, in some instances (Tigers and Panthers), far superior their Russian counterparts, but owing to the overwhelming numbers used by the Red Army. The price paid for the victory was also high-9000 tanks lost in combat against 2200 German tanks. It also became evident that T-34 could hardly cope with the new samples of the German armor and that is was the high time to shift priority from the mass production to major modification of T-34.

The special commission assigned by the Party investigated and analyzed the character of damage to the hundreds and thousands of the destroyed tanks. The attempt to add extra armor on T-34 was made. The result was named T-43.

The conducted with T-43 experiments proved that dressed in the extra armor T-34 lost most of its best features, such as maneuverability and speed, without any real gain in defense against deadly 8.8 cm gun. The new tank needed not so the better armor as the better gun.

Simultaneously the independent experiments were conducted with KV-13 in order to create the so-called universal tank, or, practically, the main battle tank. However, KV-13 having the same 85 mm gun was heavier and more complex in the production, so the preference was given to T-34. The KV-13 design was later used to create IS-2, which finally offered the proper opposition to Tigers.

In August 1943, special meeting of GKO (State Defense Committee) decided that more powerful gun should be installed on T-34. In the end of 1943 after testing and experimenting with guns, turrets and caliber, it became clear that the 85-mm gun could not be installed in the old turret. The designing of the new one was carried out by the production works No.112 "Red Sormovo" in Gorkij.

On December, 15,1943 on the base of three hull prototypes and turret yet to be finished, GKO made decision to start mass production of T-34-85. At this moment, no gun from three independent projects was ready to be installed, as all were to be adapted to the new turret. The works on the improvement of the turret design allowed curing old problems with the turret by increasing its size. At last, the tank commander could command the tank, as one more member was added to the crew.

GKO also decided on which gun was to be used (Grabin's). However, the first production T-34-85's had another gun (Petrov's D-5T), same as was installed on SU-85. The hull was practically the same as T-34 mod. 1943. The gun mask was distinctively different from that of Grabin's ZIS-S-53, which finally went into the mass production in January 1944. The changes in the design of the tank did not affect the production.

The most of T-34-85 rolled off production lines of the plant in Nizhnij Tagil. All three plants made different turrets. The most distinctive was so called "composite" turret of the Plant No.112. During production, T-34-85 was numerously modified, although the basic shape was retained.

T-34-85's saw the first combat in the spring of 1944 with 1st Guard Tank Army and since then took part in all the battles of the WWII , Korea, Middle East and Vietnam. The tanks were exported to many countries after the war.

In the hands of experienced tankers, T-34-85 was an awesome weapon despite the Tiger's superiority at the long ranges, that is, Tiger could kill T-34-85 earlier than 85 mm gun could bore a hole in its skin. 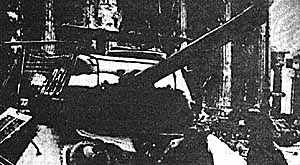 Still, T-34 stood a good chance of success owing to its maneuverability. Pz.IV of late versions was roughly comparable to T-34 in firepower but T-34-ka had better dynamic characteristics combined with the effective armoring.

Still, the threat from German Faustpatrons forced to introduce some field modifications, especially during the fight in Berlin (see the photo). The additional screening consisted of a thin, 1.5 mm, metal plate or a 3 mm wire mesh welded on the supporting corners. The shield was placed in 15-20 cm from the main armor on the sides of the hull, turret and the turret's top. Although the screening effectively deflected the hits of Faustpatrons, further development was stopped with the end of the war.