The fire accompanies the man throughout the history. The reflection of the inherent to the fire terror might be seen in the fairy tales about fire-spitting dragons. As in many other cases, the road from the gift of Gods to the weapon was short. The flame-throwers of a kind were known and employed from the medieval ages and even earlier, for example, Greek fire. The armies around the world could not overlook devastating effects of the fire, which simply asked for the military use. Naturally, the flame-throwers were used in the modern times as well and specifically during the World War II. 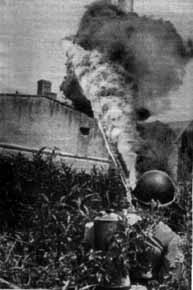 half of the war. In the last phase, meeting the strong prepared defense lines, after horrors and losses of fighting in the cities, the Red Army widely employed these units as an integer part of the front line troops and storm armies. They played an important role in the fight within cities. For example, 104 assault groups and 26 assault units were engaged in the siege of Koenigsberg.

Typical assault group consisted of infantry platoon with 2-3 tanks and 2 field guns (76 mm or 122 mm) for the fire support, a company of miners, a company of flame-throwers and 2 AT guns. The assault unit included a battalion of infantry, 10 tanks, battery of 120mm mortars, battery of field guns and a couple of heavy guns, platoon of miners and platoon of flame throwers, i.e. a few storm groups. Often the infantrymen in assault groups were equipped with bulletproof metal vests. Some sources said that the fight with the Soviet heavy infantry had the demoralizing effect on the Germans as they appeared to be not affected by the fire.

Both assault groups and units should not be mixed with storm armies, which was formed on the other principle. Assault groups operated in three operational parts: assault part, fire support and reserve. The groups were tasked with destroying the enemy's fortifications, hence the inclusion of all necessary means for the purpose. The main attacking element of these groups and units in the cities were flame-throwers because the flame could penetrate the places and corners no other weapon could. There are numerous indications that the flame-throwers were used widely and to the great effect, especially so in the cities. The stream of fire were devastating the enemy's positions in the buildings and cellars.

The infantry had their own pack flame-throwers and special mine like charges could be used as well to detain the advancing troops.

With the developing of the operational art the flame-throwing tanks were united in independent units and used to add a punch to the storm armies. Typically, these units, Independent regiments or battalions, were used together with the standard tanks and batteries of SP guns. With the advance operation in progress, the flame-throwing tanks were used for a while as normal tanks before the unit was put in reserve.

The tanks with the flame-throwers were collected into the independent tank regiments, which accompanied assault groups in the advance operations.

The pictures of tanks from the book "T-34",Moscow,1996  See also article on salvage of T-34 with flame thrower